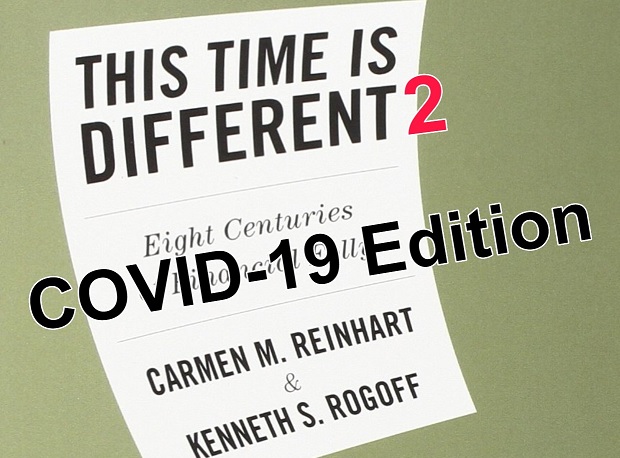 The economic recovery from the coronavirus pandemic will take at least five years.

In an interview with Bloomberg Markets, Carmen Reinhart and Kenneth Rogoff make some convincing arguments why they believe that the global economy will take significantly longer to recover than the official consensus. Both the Fed and the ECB see a possible recovery by the end of 2021.

They take a contrary view to Fed Chairman Jerome Powell, who stated over the weekend that he was optimistic that the US economy will start to recover in the second half of this year. “This economy will recover. And that means people will go back to work. Unemployment will get back down. We’ll get through this. It may take a while. It may take a period of time. It could stretch through the end of next year. We really don’t know,” Powell said.

The view from Europe is similar, with the eurozone economy expected to return to its pre-pandemic levels by next year at the earliest, Philip Lane, the European Central Bank’s chief economist. “From today’s perspective, it looks in any case unlikely that economic activity will return to its pre-crisis level before 2021, if not later”.

Carmen Reinhart and Kenneth Rogoff, published their bestseller “This Time Is Different: Eight Centuries of Financial Folly” in 2009 based on the premise that the 2008-09 credit crisis was far from unique. In an interview with Bloomberg Markets, the authors point out that the current COVID-19 crisis is really is different!

Reinhart notes that the current outbreak is different from prior pandemics in terms of the economy, the policy response, the shutdown, especially the “abruptness and the widespread shutdowns we had not seen before.”

Rogoff states “Certainly the global nature of it is different and this highlights the speed. We have the first global recession crisis really since the Great Depression. In 2008 it was the rich countries and not the emerging markets. They [the emerging markets] had a “good” crisis in 2008, but they’re not going to this time, regardless of how the virus hits them”

When asked about the stock market surge which is at odds with the state of the economy. Reinhart argues that there is a disconnect between the reaction of the stock market and the actual state of the economy. She states that “the blanket coverage by the Fed is broad, and that is driving the market. And expectations are that we’re going to have this nice V-shaped recovery and life is going to return to normal as we knew it before the pandemic. And my own view is that neither of those are likely to be true.”

“The recovery is unlikely to be V-shaped, and we’re unlikely to return to the pre-pandemic world. Although I do think that that’s part of the reason why we see this incongruence between the economic numbers and what the market is doing,” Reinhart states.

Rogoff believes that “the markets have a very sanguine view of the virus and what’s going to happen and how quickly we can return to normal or maybe how quickly we will choose to return to whatever normal is.” He adds “the market is banking on this V-shaped recovery. But a lot of the firms aren’t coming back. I think we’re going to see a lot of work for bankruptcy lawyers going across a lot of industries.”

When asked, “So what does the economic recovery look like?”

Reinhart said “There is talk on whether it’s going to be a W-shape if there’s a second wave and so on. That’s a very real possibility given past pandemics and if there’s no vaccine.”

Another reason why she believes that the V-shape story is unlikely is related to the structure of more developed economies and their reliance on large service sectors.

“Another reason I think the V-shape story is dubious is that we’re all living in economies that have a hugely important service component. How do we know which retailers are going to come back? Which restaurants are going to come back? Cinemas? When this crisis began to morph from a medical problem into a financial crisis, then it was clear we were going to have more hysteresis, longer-lived effects.”

Rogoff said “So there are going to be phenomenal frictions coming out of this wave of bankruptcies, defaults. It’s probably going to be, at best, a U-shaped recovery. And I don’t know how long it’s going to take us to get back to the 2019 per capita GDP. I would say, looking at it now, five years would seem like a good outcome out of this.

Overall the two economists believe that both the official consensus and stock market valuations are based on an overly optimistic view of the likely V-shaped recovery. They make some very convincing arguments about why the recovery is likely to take longer. It is also more likely to be a U-shaped recovery or a W-shaped one.