The end of the bubble as we know it? 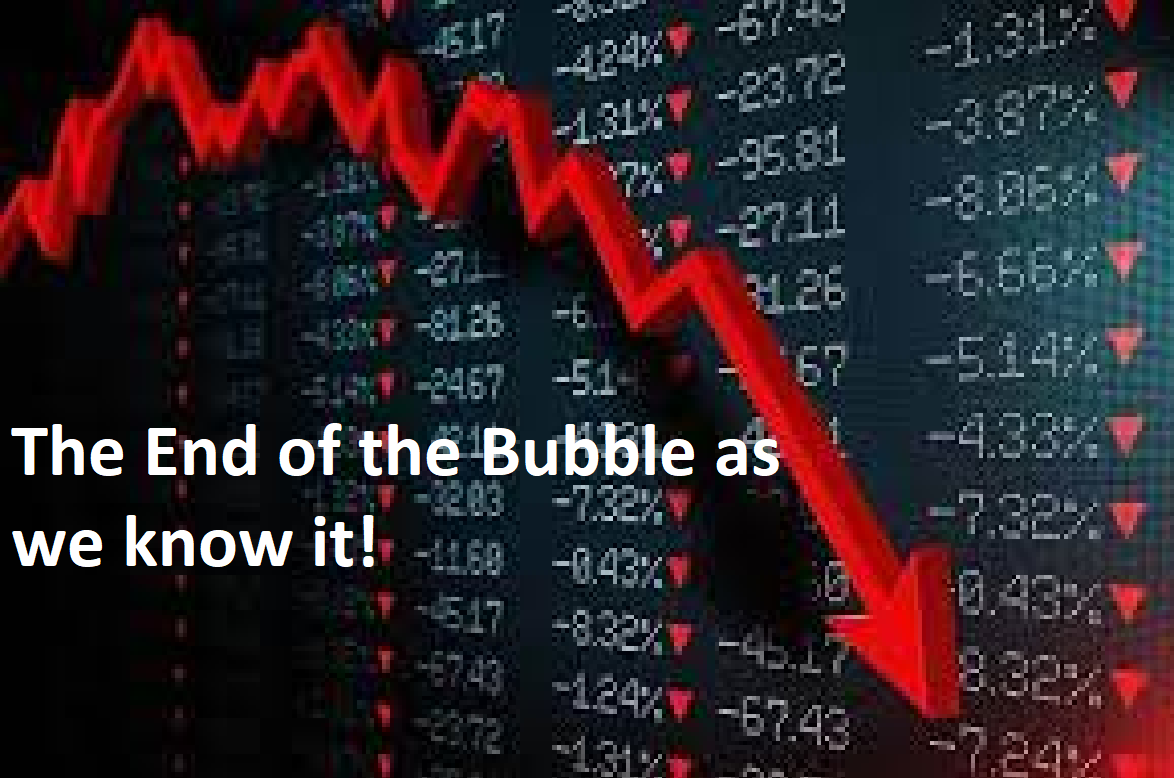 Grantham believes that the S&P 500 will fall to 2,500 (currently trading around 4,550). The timing is uncertain but all the elements are now in place!.

He believes that the US stock market is currently a “super bubble”, one of only 4 in the past 100 years. The others are the great crash of 1929, the dot-com bust of 2000 and the Global Financial Crisis of 2008.

Grantham believes that we are in the midst of multiple asset bubbles at the same time, global real estate, the US stock market, the bond markets and commodities.

Previous equity superbubbles had a series of distinct features that individually are rare and collectively are unique to these events. In each case, these shared characteristics have already occurred in this cycle. The checklist for a superbubble running through its phases is now complete and the wild rumpus can begin at any time.

The report notes that the penultimate feature of these superbubbles was an acceleration in the rate of price
advance to two or three times the average speed of the full bull market. In this cycle, the acceleration occurred in 2020 and ended in February 2021, during which time the NASDAQ rose 58% measured from the end of 2019 (and an astonishing 105% from the Covid-19 low!).

The final feature of the great superbubbles has been a sustained narrowing of the market and unique underperformance of speculative stocks, many of which fall as the blue chip market rises. This occurred in 1929, in 2000, and it is occurring now.

A plausible reason for this effect according to the GMO research is that many experienced professionals who know that the market is dangerously overpriced yet feel for commercial reasons they cannot sell all of their portfolios and go to cash so instead go for the relatively safer blue chip stocks. The report states that this is is why at the end of the great bubbles it seems as if the confidence termites attack the most speculative and vulnerable first and work their way up, sometimes quite slowly, to the blue chips.

What is new this time, and only comparable to Japan in the 1980s, is the extraordinary danger of adding several bubbles together, as we see today with three and a half major asset classes bubbling simultaneously for the first time in history. These bubbles are in real estate, stocks, bonds and finally overpriced, or above trend, commodities including oil and most of the important metals. In addition, the UN’s
index of global food prices is around its all-time high.

What can an investor do? According to Granthamavoid U.S. equities and emphasise the value stocks of emerging markets and several cheaper developed countries, most notably Japan. Keep some cash for flexibility, some resources for inflation protection, as well as a little gold and silver.

In terms of Cryptocurrencies Grantham has some harsh words he says that they “leave me increasingly feeling like the boy watching the naked emperor passing in procession. So many significant people and institutions are admiring his incredible coat, which is so technically complicated and
superior that normal people simply can’t comprehend it and must take it on trust. I would not. In such situations, I have learned to prefer avoidance to trust.”

Navigating bubbles is fraught with all types of risk – absolute, relative, and career. This time is no different: when mean reversion will begin is inherently unknowable. However, there remain significant opportunities to make money and reduce risk in today’s market, just as there were in 1987, 1999, and 2008. We know that selling winners and rebalancing into losers is good investment discipline but incredibly difficult to do for a whole host of behavioral reasons.