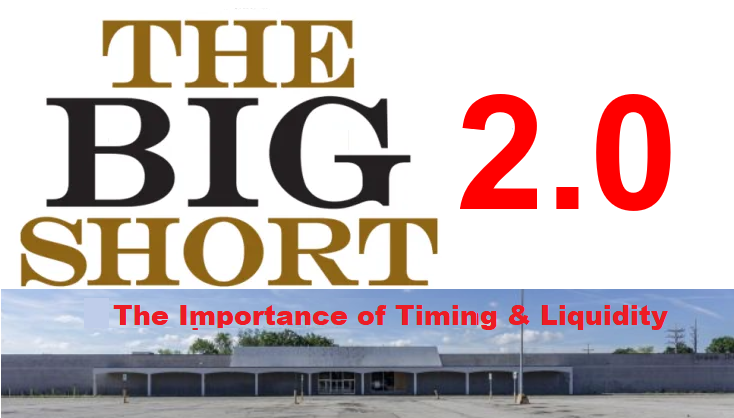 The Importance of Timing, Liquidity and Luck!

In recent weeks Carl Icahn has been discussing his biggest short, CNBC on the 13th of March and most recently on Bloomberg on the 5th of April 2020. Icahn put his position in place in the second half of 2019.

“The Next Big Short”

In spring 2017 it was widely reported that a number of hedge funds had put on a bearish trade on US shopping malls through the commercial real estate market. This trade was quickly dubbed the “The Next Big Short” as the funds positioned themselves for the “retail apocalypse”. As consumer shopping increasingly moved online and Amazon started to sell apparel it was felt that the “death of retail” was nigh and this would trigger a wave of retailer defaults, causing huge problems for their landlords.

Rather than shorting retailers equity or REITS, where they could be caught in a short-squeeze, the funds focused on the Commercial Mortgage-Backed Securities (CMBS) market. They sought out deals with underlying loan maturities in 2017 and 2018, backed by malls in weaker locations. They expected many of the anchor tenants to default within 24 months resulting in store closures and viability problems for the whole mall. This would trigger defaults on the CMBS bonds as the underlying loans could not be repaid.

The vehicle of choice was the CMBX (BBB- or BB tranches) which is a synthetic Credit Default Swap (CDS) index, it is equal-weighted on 25 CMBS mezzanine bonds. The short traders focussed on indices that had anchor tenants that were getting into financial difficulty. The trade involved buying protection or insurance on the BBB- and BB tranches, as they are the first to suffer losses when underlying loans default. A deterioration in pool quality causes the cost of protection rises and the fund can close out their position and lock in a substantial profit. This is called a short trade as the traders make money when the value of the tranche falls.

How the Big Short 2.0 Works

According to Trepp most of these investor short positions focussed on CMBX.6 as well as CMBX.7 as they were the first two CMBX series launched after Great Financial Recession. They also had large retail exposure 39% in CMBX.6 and 35% in CMBX.7 loans. Mall loans comprised 47% ($4.1bn) and 51% ($3.8 bn), respectively of the retail component of each index. This translates to about 18% of the then outstanding balance of the two indexes.

How the idea came about

In 2015, Alder Hill Management founder Eric Yip was concerned about the viability of US regional shopping malls. He started touring the country to visit them. They seemed to be poorly maintained, generally in need of refurbishment and many had a large proportion of family-run businesses which he speculated weren’t paying much rent. This was very reminiscent of the FrontPoint Partners field to Florida to see what is actually happening on the ground in the sub-prime market in The Big Short.

Alder Hill was a vocal advocate of the trade. In an article in the Daily Mail in April 2017, Yip said that he was betting that bonds containing mortgages paid by shopping malls will fail to be repaid as stores go bust. He was widely believed to have bet half of the funds at Alder Hill on the CMBX. 6 trade.

The article noted that he was also trying to encourage other investors to take a punt, too. He wrote a dossier which he sent round Wall Street outlining what he believed to be the bleak outlook for US retail stores.

In September 2017 the sudden collapse into bankruptcy of  Toys ‘R’ Us convinced a lot of short-traders that “retail Armageddon” was around the corner. The commercial real estate market was unnerved as an expected rescue deal did not get done before the crucial holiday shopping season, the period where Toys ‘R’ Us did the majority of its business and earned most of its revenues. Although Toys “R” Us properties were generally not in malls, typically in big box stores next to them, they still accounted for 15% of the loans in the CMBX.6.

The “Long Side” of the trade

In November 2017, Global Capital ran an article called “CMBX Short Trade May Have Run Its Course“. The article noted that an equal number of participants were entering the market taking the opposite side to the Big Short 2.0. These participants were reported as Putnam Investments and AllianceBernstein.

While the CMBX.6 index initially dropped through 2017 as retailers from Toys “R” Us Inc. to Gymboree Corp. went into Chapter 11, the index rebounded in 2018 and 2019, making it a painful trade for the short traders.

Cushman & Wakefield in a June 2018 report noted that “There were nearly 8,500 store closures in 2017, surpassing the number that occurred during the Great Recession. Closures in 2018 are expected to match or exceed that level. Announced store closures have reached approximately 4,500 a year to date.” They estimated 9,000 store closures for 2018, yet the CMBX.6 continued to rise in value.

In August 2018, the Wall Street Journal wrote an article “Mall Bear Doubles Down on Bet, Even as Shopping Centers Show Some Life”, it reported that Yip, “A hedge-fund manager known for wagering on the demise of the weakest American malls is raising the stakes, betting some of the hardest-hit shopping centers are in a death spiral.”

In March 2019 Canyon Partners told Bloomberg that it was betting in excess of $1bn against low-rated debt on U.S. CMBS over concerns that valuations were stretched as economic conditions were deteriorating. Its strategy was to short the CMBX Series 9, 10 & 11, the more recent issues. They believed that credit underwriting standards had deteriorated in the CMBS market relative to earlier vintages. There were more interest-only loans, lower-quality borrowers in terms of their ability to hit income projections, and the performance of the deals had deteriorated. Canyon said that this short is not a directional bet, but downside protection against a weakening economy.

In October 2019 the Wall Street Journal reported that Alder Hill was winding down the entire $300m fund. The WSJ noted that “Alder Hill and other short sellers – or traders who bet that the price of a bond, stock or other asset will fall – have found that their wagers against commercial mortgage-backed securities tied to retail property didn’t go as planned.” Alder Hill was one of the first to go public with its bearish bet but didn’t survive long enough to see its view come true. A good indication of the size of the losses was provided by MP Securitized Capital Partners, a former FrontPoint Partners fund. They reported a 37% loss for 2019 on their CMBX.6 position.

Alder Hill failed because the rise in retailer bankruptcies and store closures, since 2017, didn’t produce a significant increase in missed loan payments by mall owners. In addition, the cost of paying the insurance premiums on a leveraged position on the CMBX was a big drag on their cash.

One reason for the resilience of the CMBX.6 was that mall landlords had become more flexible in negotiations with tenants over lease terms and staggered maturity dates. Weaker malls also sought alternative tenants for their malls including medical centres, offices and co-working spaces. All of these measures helped to keep income flowing and the loans performing.

In November 2019 the Wall Street Journal ran an article “Carl Icahn Placing a Big Bet Against Mall Owners” “Investors have lost hundreds of millions of dollars wagering that struggling mall owners won’t be able to pay their debts” the article reported. They claimed that Icahn wasn’t deterred by these losses and was also shorting the CMBX.6.

One of the investors who was talking long positions, Alliance Bernstein published a report called “The Real Story Behind the CMBX. 6: Debunking the Next ‘Big Short”. They believe that the American mall is not dying but evolving. They also believe that as many as one-third of malls are at risk of closure as management refuses to invest. CMBX.6 has 37 regional malls that are dominant in their region, produce ample internal cash flow to support both capex and debt service and have enough sponsor equity to reposition to meet evolving consumer demands. The report noted that even if the US mall is dying, CMBX.6 is an inefficient method of taking that view as it holds less than 1% of malls.

The Longs get burnt by COVID-19

On the 20th of March 2020, the Financial Times reported that more than two dozen funds managed by AllianceBernstein have sold about $4bn worth of protection on the CMBX.6 BB tranche. This position had fallen in value by 25% in the preceding two weeks indicating higher expectations of default. The trigger was the decision by Simon Property Group to close all its properties in repsonse to COVID-19. markets are woried that stores may remain closed for longer than initiall thought. This adds further pressure to retailers that were already struggling to maintain profitability. In addition to the short-term closures, there is a concern that social distancing policies will result in longer-term, unintended shifts in consumer shopping behaviour and demand.

In response to these losses, AllianceBernstein said that even if some borrowers ultimately default, there is unlikely to be a cash payout for several years and any such liabilities will ultimately be smaller than the premiums that they receive for providing the insurance. However, they did not address the negative mark market impact on their finds!

According to media reports, MP Securitized Credit Partners returned 65% in March on their CMBX position, more than offsetting a 16% loss on their CMBS holdings. The fund has gained almost 53% on a net basis in 2020.

According to Trepp, the timing of Icahn’s trade could not have been better. Not only did he not suffer losses in 2017 and 2018, but once concerns over retailers started closing stores over COVID-19 in march, he began to record significant profits. Trepp noted that “no one could have foreseen the turn of events over the last month when Icahn put on the short.”

Like most Big Trades, the fundamental rules remain the same! Liquidity, timing & luck! As John Maynard Keynes allegedly said, “Markets can stay irrational longer than you can stay solvent.” Alder Hill was the first into the trade and the first out, with huge losses. MP Securitized Partners came in later, could carry their losses and eventually reaped the benefits! Carl Icahn came late to the party and took his gains with no pain, perfect timing! Finally, the trade only came into its own once the ramifications of COVID-19 on the retail sector were recognised. Without this unexpected catalyst, it is probable that the mall owners could have continued to survive as the hedge funds haemorrhaged cash. A stroke of luck for the shorts, misfortune for the longs!